yasiin bey, who came to prominence known as Mos Def, has a new song reinterpreting the Jay-Z/Kanye West’s ubiquitous megahit “N**** in Paris.”

The new video and song “N**** in Poorest,” released on the 47th anniversary of Malcolm X’s passing, finds the landmark rapper, actor and outspoken social commentator repurposing the driving beat for a rather more appropriate use than the original’s “99%er turned 1%er” storyline. In a frantic response to horror-movie beat, bey gets really real, contrasts the growing violence and poverty in the United States with images of power players and war. If the West/Z original is a celebration of the fish-out-of-water, possibly brought to us by McDonalds, yasiin bey has delivered some major socio-historical context in a manner seldom seen in the music video realm.

Jay-Z and Kanye West’s version finds them performing on a stage, presumably in the French capitol, backlit with a constant strobe light. Their images are doubled on either side of the screen to hypnotic effect. (A disclaimer running before the video’s YouTube version warns away those prone to seizures.)

yasiin bey’s video is a stripped-down upset performance, interspersed with clips of economic, cultural and other distress from news, politics, popular movies and television. At the point in West/Z version that samples a scene from a Will Ferrel film, bey features a clip from a rarely seen Malcolm X interview in which the leader speaks about a source of his courage.

The new remix is the first installment of yasiin bey’s Top 40 Underdogs project, in which he will remix 40 popular songs with socially conscious freestyles.

Last night’s Amazing Race finale saw Type A (and Type B+) engaged Chicagoans Cindy and Ernie running across the map-shaped finish line first, vowing breathlessly to host Phil Keogan that they would start a non-profit with their $1 million prize money to help the children they had met on their jaunt from Taiwan to Thailand, Indonesia to Malawi, Denmark to Belgium to Panama.

“We want to help inspire them to live a better life and contribute to the global economy,” Cindy said, a loaded statement if there ever was one.

But the question remains: who won the Amazing Race, really?

Best Social Media Save: The guy at the gas station who took to Twitter after finding Kaylani of Kaylani and Lisa’s passport after it sprang out of their SUV and reunited it with her at LAX… on the very first leg of the race. Almost spelling head-slapping doom for the team of former showgirls.

Stank-est Attitude that Could Have Cost You The Race: Cindy, of Ernie and Cindy, who dropped and lost their train tickets while whining that all the competitors would be taking the same train out of Denmark, erasing the lead they had stressed their way to.  Luckily for them, the tickets were never collected.

Mr. and Mr. Congeniality: Loveable snowboarders Andy and Tommy who did inverted 720s through the race, vocally loving Jesus, winning six episodes and exchanging enthusiastic whooos in multiple languages. Until they reached Panama and the rest of the teams benefitted from the teamwork ingrained in the Panamanian cab driving profession when faced with a flock from the EEUU gritando “Rapido! Rapido! – we’re in a race!”

Herbal Essences™ Goodwill Ambassadors: Twins Liz and Marie who gave a group of Indonesian resort employees a good deal of amusement when they failed to stab and shimmy beach umbrellas into the sand. Only to turn right around and give a group of older Thai men hearty belly laughs when they shoveled baby elephant dung, squealing in delight.

Certified 100% Oregon Tilth Organic: Grandparents Bill and Cathi who past the age of 60 would rather build and sail a raft than make waffles given the choice, not to mention climb a cliff face and not even mind oiling up for a bodybuilding competition with good natured aplomb, wise cracking at their difficulties and setting an example for the usually lightly bickering and frequently unsupportive Jeremy and Sandy.

Most Valuable Players: married couple Marcus and Amani, who finished third. After often falling to last place, they gave hints to teammates and got a spontaneous crowd rooting for them as they solved a slide puzzle in Malawi.  All amidst effortlessly solid football metaphors from former pro-baller Marcus. “She’s smarter than any quarterback that I’ve ever played with and tougher than any linebacker than I’ve faced,” he said of his wife and the mother of their four children. 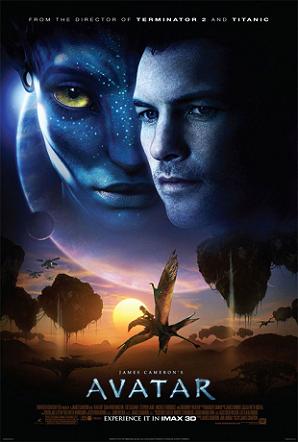 You may have won the last 500 years, but you’ll never colonize Space!!!

Just as District 9 indicated that there are enough realistic big-budget blockbuster movies about the horrors of apartheid in South Africa, there are apparently enough realistic big-budget blockbuster movies about the American genocide, according to Avatar.  Just kidding.  I know the value of a sci-fi satire as well as anybody.  But these are actual historical events, the repercussions of which persist today and are largely unrecognized by the cultural mainstream that Cameron is playing with, so heavy on the “real 3D” and CGI and lite on the story and context.

I would love to see a realistic epic historical blockbuster movie about people of color battling invaders and oppressors.  Hollywood does epic European versus European very well (see Braveheart) but notably Mel Gibson’s Apocalypto faded to black just before Jaguar Paw and his folks’ impending struggle against the arriving Europeans; the villians in that flick were Mayans.  Danny Glover’s plans to create an epic film about the Haitian Revolution and Toussaint L’Overture have been stalled more than a decade, as financing has been a real problem.

Cameron’s recycling a trusty myth that’s been kicking around the U.S. from James Fenimore Cooper to Dances With Wolves (as many others have pointed out, including David Brooks in the New York Times) of white man goes Native and finds his soul in the indigenous culture, which he then goes on to not only be accepted into, but to master, exemplify and then lead to (SPOILER ALERT) victory.  In Avatar, anyway.  Stay tuned for the real updated score for the Black people of South Africa and the original people of the Americas on your nightly news.  Oh, wait…

Akin to the fishiness pointed out by comedian Paul Mooney of a couple blockbusters of the early 2000’s [“First you had The Last Samurai starring Tom Cruise.  Then you had The Mexican starring Brad Pitt”], like authorities terming Zapotec Mexicans aliens for setting foot in Arizona, the indigenous people of Avatar also happen to be aliens.  Writer, director and producer Cameron tells a story of plundering land and attempting to destroy a people who were living in harmony with nature in the name of a outrageously coveted mineral (actually called “unobtanium”) – IN SPACE.

But wait a minute.  Leaving aside the Dances With Wolves plotline, isn’t there value to the themes of Avatar?  What about the kids – they’re hearing the lessons of live in harmony with nature, don’t take what you don’t need, honor your ancestors and (ahem) paint with all the glow-in-the-dark colors of the wind.  The story that emerges has many touching moments, as the Na’vi culture (aesthetically like a glow-in-the-dark combination of Lakota and Masai – only the people are massive, catlike and blue) believes that all energy is enduring and that they can communicate with their ancestors through nature – cool, right?  It’s not often that you hear those sentiments expressed on the screen – big or small.

And the $500 million spectacle that unfolds on the screen is not to believed.  Thanks to the “real 3D” that I saw it in, even things like the foreground edges of desks seemed real enough to touch.

But the creation of an indigenous culture from whole cloth by Cameron is a little weird.  Though the Na’vi are grounded in nature, there is also something subtly high tech about them – their natural world glows neon like a Tokyo nightclub and they can “upload and download” ancestral memories from fiber-optic trees and communicate with animals by literally plugging in their long braids (as emphatically pointed out by Sigourney Weaver’s scientist, still game to tromp around a space ship in cargo shorts and an undershirt).  Also, when hero Jake Sully’s Na’vi avatar appears, they don’t seem to question how a “sky person” could inhabit the body of one of their own, but then are horrified when he turns out to be an avatar.  This is just one part of the eerie blue pall of condescension that Cameron casts over the people of his imagination.

And there is even precendent for Cameron allegedly co-opting the artistic expression of people of color before.  A lawsuit filed by African American author Sophia Stewart claims that Terminator 2 is lifted from her sci-fi epic novel The Third Eye.  Stewart’s lawsuit also names The Matrix creators the Wachowski brothers.  According to Stewart, in her book, the young boy character of Terminator 2 grows up to become the Neo character of the events of The Matrix (which in The Third Eye is a deeper allegory of slavery and colonization than appears in that film, also produced by Terminator and Avatar studio Fox).  After a judge ruled that the muti-million dollar lawsuit could go forward, it was thrown out when Stewart failed to appear at a hearing.  (Check out this interview with Stewart for more details.)

Leaving aside all of that, Avatar provides an intriguing parallel universe story of victory of people and nature over colonization and exploitation.  The film has been endorsed by President Evo Morales of Bolivia (after he saw it in his third ever trip to the movies) and condemned by the Vatican, which is offended at the suggestion that nature can replace religion (sort of like they were during the 15th Century).  But $500 million could probably finance five epic historical blockbusters of actual battles between indigenous people and colonizers (lite on the CGI, heavy on the story and context).  Which ones would you like to see?