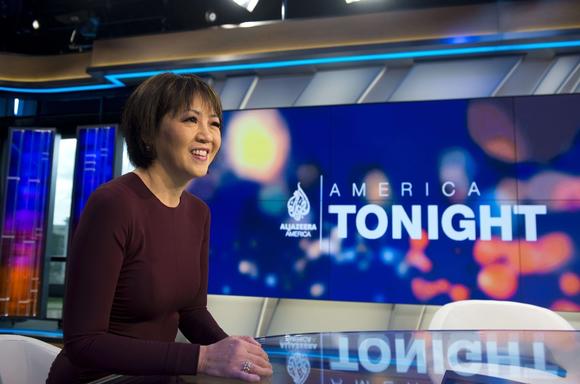 Perhaps angling for the small but thoughtful fan base of the HBO series The Newsroom, the new Al Jazeera America nightly news program America Tonight features a series of 15 second commercials profiling  its  producing staff. Each of whom, incidentally, seem like more interesting characters than any of HBO’s fictional Newsnight staff, who for all their biting satirical commentary on recent events sometimes sound about as fresh and relevant as Howard Beale with an Emo haircut.

But while The Newsroom truth is mostly regurgitated Real Time with Bill Maher editorials in Cronkite drag, AJAM is Real Television Journalism and ain’t nothing like the real thing.

In fact, if it were an HBO series, Al Jazeera America would actually be The Wire, unflinching at the bold societal implications sparked by urgent current events, and in hot pursuit of the root causes that make it so. In fact, speaking of Baltimore, David Zurawik agrees in The Baltimore Sun on AJAM’s inchoate urgency.

Al Jazeera America debuted Tuesday 8/20 (find it on your dial), in the place of Al Gore’s ill-fated Current TV, which AJAM purchased for the generous amount of $500,000,000. It promises stories like a week-long series on Chicago’s segregated street violence, pieces on genetically engineered salmon farms, and profiles of successful urban U.S. public schools, plus documentaries, all day and all night.

Wednesday night the America Tonight series Fight for Chicago featured remarkably nuanced reporting on the issue of street violence on the city’s South and West sides. Not just throwing up its hands at the chaos, the report mentioned the several convergent forces, like the Sinaloa cartel, the demolition of the city’s public housing, incarceration of a generation of local gang leadership, proliferation of guns in America, and generalized lack of economic alternatives to drug selling. America Tonight anchor Joie Chen moderated a discussion where local leaders from the communities hardest hit joined via satellite, were respected and given ample time to talk, something that doesn’t even happen on Melissa Harris Perry’s MSNBC show. NPR’s This American Life got the issue of violence in Chicago national attention with its moving Harper High School series, getting Michelle Obama to visit the school. Let’s hope AJAM’s series elicits a proportionate West Wing response.

Attempts are being made to marginalize it. Time Warner Cable per-emptively dropped Current when the planned sale was announced earlier in the year, while AT&T dropped the channel dramatically at 11:59pm on Monday night, just before AJAM’s launch, breaching the broadcast agreement, prompting Al Jazeera to file a lawsuit.

Al Jazeera (literally “the island”) is owned by the oil-rich government of Qatar which decided to become the patron of journalism for the world. Al Jazeera maintains its complete editorial independence. The Guardian reported last year that Al Jazeera editors insisted UN debate on Syria including footage of a speech from the leader of Qatar, despite staff members claims that it was not the most important part of the debate. Frequently, it is praised for insistence to tell all sides of a story, sometimes bringing danger upon itself in the process. With this refreshing platform for news delivery, it is now us, the people of America, who must tune in and operationalize the relevance of this new, nonstop news source.

Earlier in the summer, at the Aspen Ideas Festival, when Ehab Al Shihabi, Al Jazeera’s executive director of international operations, spoke about the launch of the network, and stated that 40- 50 million Americans wanted more original and in-depth news from television broadcasting.

MSNBC’s Lawrence O’Donnell, who recently hinted he might be more of a showbiz man than a journalist, openly scoffed at the idea that the news information needs of the United States people were not being met. “I think if you did a survey of the 300 million Americans, I think something like 50 million would tell you they want to read the complete works of William Shakespeare. They won’t,” blustered O’Donnell. People seeking “real” news, would find it at the PBS NewsHour, he said, interestingly, not defending the originality and in-depth nature of his own network.

In a 24-hour news cycle, the idea that everything needed to inform the American public in a globalized world can be found in a one-hour program shown at 6pm, when most people aren’t even home, is just wrong.

The real answer was that people seek it out online, in “lean forward” time-shifted news-gathering, where myriad  public, global, independent, and authentic news sources are available. But Al Jazeera America is right to go for the “lean back” experience of the cable news watching set, they have the money, and they are really going for it. Because 24 hour news cycle is what dictates the U.S. political conversation. And AJAM has the cash to get the glittering sets, in soothing but vibrant colors, the familiar faces like Chen, Soledad O’Brien, and Ali Velshi, all formerly of CNN, and saying  “America” as many times as it can in its marketing.

Uninformed, xenophobic knee-jerkers will object solely on the basis of the networks’ Arabic name and foreign ownership, but really, this is the journalism that America made famous, being re-claimed by a “mad as hell” real-life cast of U.S. journalists. With no need to play to the corporate seats, or tamp it down so as not to offend, Al Jazeera America swept into our cable news like a steady wind of fresh air, just when, like Toni Braxton, we thought we might never breathe again.