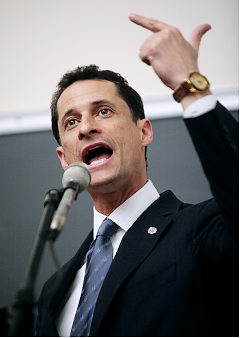 Did anyone else watch the Anthony Weiner emergency press conference?

(Welcome to What S(He) Could Have Said, a new feature in which we explore what could have been said at different moments in time)

Last week, Rep. Anthony Weiner admitted to accidentally posting a lewd but clothed photo to Twitter, and then lying about it at an embarrassing press conference. Embarrassing to be sure, but in his abject apology press conference, Weiner perhaps over-compensated, calling it a “terrible” action in a world full of things far more terrible than some suggestive tweeting. He then vowed to focus all his energy on getting right with wife Huma Abedin part of Hilary Clinton’s inner circle, who was not at the press conference.

Weiner, you jerk! But by drawing out this sophomoric story, is the media being jerkier? Here’s what he could have said.

REP ANTHONY WEINER: “Good afternoon. Thank you for coming. I want to take this opportunity to talk about some things that have transpired in the last ten days or so.

Last Friday night, I tweeted a photograph of myself that I intended to send as a direct message as part of a joke to a woman in Seattle. Once I realized I had posted it to Twitter, I panicked, I took it down and said I had been hacked.

Some of you are shaking your head right now. Not out of righteous indignation, but because you don’t know what most of the last few sentences meant.

Yes, I got to know you folks. The elderly. You vote. To you, I am sorry. Really, really sorry.

To my wife, I’m deeply sorry. To my wife’s boss, Hilary Clinton, I hope you will still talk to me. And to my wife’s boss’ husband, Bill Clinton, I would like to apologize for a whole other series of reasons. I would also like to take this opportunity to point out that my sex scandal is Dirty Dancing to your sex scandal’s Deep Throat.

it was really, really stupid. Naturally, I regret it. A little tequila and a iPhone 4 have never done worse. Anyone who disagrees with that statement should use #THENEWWEINER

It was the media that first literally aired my dirty laundry. Something called the conservative blogosphere to be exact – no, elderly people, I didn’t know that was a phrase either. But addressing the whole media, I would like to take this opportunity of my public humiliation to draw your attention to a series of other current events. Events that you could, later today if you wanted to, turn your attention to instead of this one.

Leave me alone at the Sheraton to think about what I did, maybe get a refresher course on new media from my intern. Oh my gosh, why did all those flash bulbs just go off… oh, wait. Come on, you guys that’s not a euphemism for anything. My intern’s name is Stanley. Why do those flash bulbs keep going off?

Did you guys forget that a gallon of gas costs $4 and you’re still not sure what’s happening with all the oil they spilled in the Gulf of Mexico, anyway? Where’s the follow-up to what Sanjay Gupta said on CNN about cell phones killing your brain in a totally trackable way?

Do you think that now that we got Osama Bin-Laden, we can bring the troops home? Or maybe the explanation is more complicated than that. Well, you’re reporters! Get to fact-checking, m**********s.

What about why do a lot of people in your government who now have juice seem to want “real sick” to keep translating to “real broke”?

Sarah Palin, I blame you. I don’t know why, but I just do. You were the one who was just around the most when I noticed the U.S. government turning into an US magazine.

Frankly, gang, if accidentally putting a picture of a some bulging shorts up on internet is the worst thing that your government was doing, then you would be in pretty great shape. But I know how you do. You’re going to Kanye me.

[Editor’s note: Technically speaking, you can only Kanye yourself, no one can Kanye you. To be Kanye-d is to be slung with righteous indignation mud from all sides of the culture after an embarrassing event until you wake up sweating at night thinking that after you’re gone, your most referenced words might MIGHT just be a (possibly inebriated) “Beyonce had the best video of all time!” when it was (already distressingly damsel-like) Taylor Swift’s “turn to talk,” instead of when you stunned all of them, including Wayne from Wayne’s World, with “George Bush doesn’t care about Black people.”]

But no matter what you do when we all leave this Sheraton, press corps, I am now going to go out there and redeem myself. I’m not going to focus all my energy on trying to get my personal life back together – frankly, I need to cool it with the ego trips.

No, America, I’m bringing it. I’m talking some Jimmy Stewart, man of color on The West Wing, first 80 minutes of Bulworth, Russ FEINGOLD-type action. I’m going to focus my energy on being the representative you want and need me to be. And guess what, America – New York State in particular: your representative sometimes gets into uncomfortable spots in his personal relationships, accidentally posts inappropriate photos of himself and then tells a quick lie about it. Whoops! Believe me, I am so, SO sorry! That’s something you could never, ever do, right, America? Right, New York?